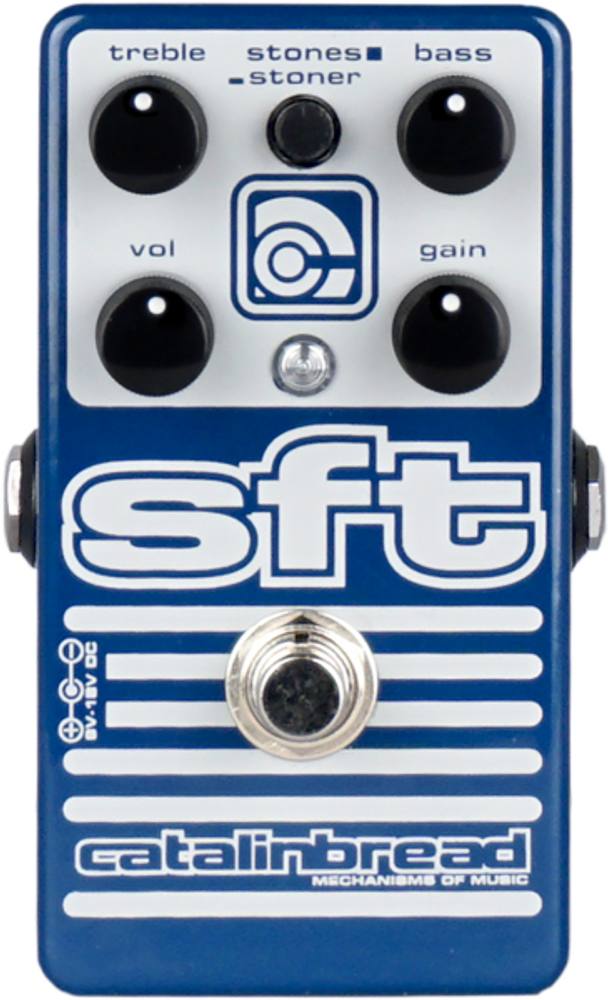 The Catalinbread SFT is an AMPEG® voiced foundation overdrive that bridges the “Get Yer Ya-Ya’s Out!” (Stones) and the Desert Sound (Stoner) eras.

We’ve always been smitten by AMPEG®. Early on the company was a Jazz purist company, completely overlooking (possibly looking down on) more popular genres like Country & Western and Rock that FENDER® and MARSHALL® openly embraced. From a design standpoint they took more queues from the hifi world than they did from guitarists as evidenced by their tube complements, gain stages without cathode capacitors, and implementation of the Baxandall tone controls. And they we’re no slouches to innovation either, “Flip-top” combos is a great example. Not to mention there is at least one model of amplifier that had a torsion bar to adjust the tightness of the speaker baffle!

The most important AMPEG® innovation was their 180 degree turn in regard to musical genre that took place in 1969 after the Rolling Stones had their entire HIWATT backline confiscated at the Canadian/US boarder on their American Tour 1969. AMPEG® stepped up to the plate providing an entire backline of 8 (and one as a backup) prototype SVT amplifiers and a tech to support them on the tour. Anybody who has listened to “Get Yer Ya-Ya’s Out!” knows that BIG, bouncy, full sound of the guitars and basses. A sound that defined the Stones sound until the mid to late 70s when they were using VT40s and VT22s. To read more about AMPEG® get yourself a copy of “Ampeg: The Story Behind the Sound“!

The AMPEG® SVT continued to be the standard bass amp for rock an roll, while their guitar amps fell into relative obscurity. That was until some dude in California named Josh Homme started using them playing shows out in the Palm Desert to a bunch of stoners. His tone and band, Queens of the Stone Age arguably defined the sound of rock guitar throughout the aughts.