More than 30 years ago, Yamaha set the standard for digital pianos with its Clavinova line and has continued to refine its technologies and sound in the decades since. The CLP-700 series is the latest entry, and among its models, the CLP-735 digital piano emerges with an acoustic grand piano sound and even more sensitive playability.

At its core is binaural sampling using the tones created by Yamaha's CFX and BÖsendorfer Imperial concert grand pianos, and Virtual Resonance Modeling, a technology further defining the Clavinova line, adds amplification properties via its on-board stereo system. Offering an upgrade this time around, the CLP-735 digital piano ensures the tone remains the same even when you plug in headphones.

Playing wise, the CLP-735 digital piano replicates the feel of an acoustic as close as possible. It begins with the visuals, including the Premium Rosewood finish and synthetic ivory-topped keys, and extends to the action, taken to a new level with the touch-sensitive GrandTouch-S™ Keyboard and the expressiveness of Real Grand Expressive 2 technology. The result produces on-point articulations and responds to your force, delivering an even wider dynamic range.

featuring the new GrandTouch-S Keyboard, which offers superior dynamic range, escapement, and synthetic ebony and ivory keytops. The fulcrum point has been separated between white and black keys to make the CLP-700 Series easier to play.  Thanks to the latest Real Grand Expression 2 (RGE2) technology, the CLP-700 Series is the most expressive Clavinova ever — converting the slightest variations in touch into a limitless range of sound that captures your individuality as a musician.

Yamaha has captured all-new binaural samples of two world-class concert grand pianos — the bright, brilliant voice of the Yamaha CFX and the warm, deep resonance of the Bösendorfer Imperial.  Experienced through headphones, binaural samples are natural and full, preserving the acoustic sound to such a degree that you forget that you’re not hearing the sound straight from an acoustic instrument. The CLP-700 Series is the first Yamaha instrument to be equipped with the voices of the fortepiano, the 18th century predecessor to the modern grand piano. Played by the likes of Mozart, Beethoven, and Bach, the sounds emitted by a fortepiano allow you to hear classical music exactly as the composer would have experienced it in their day. 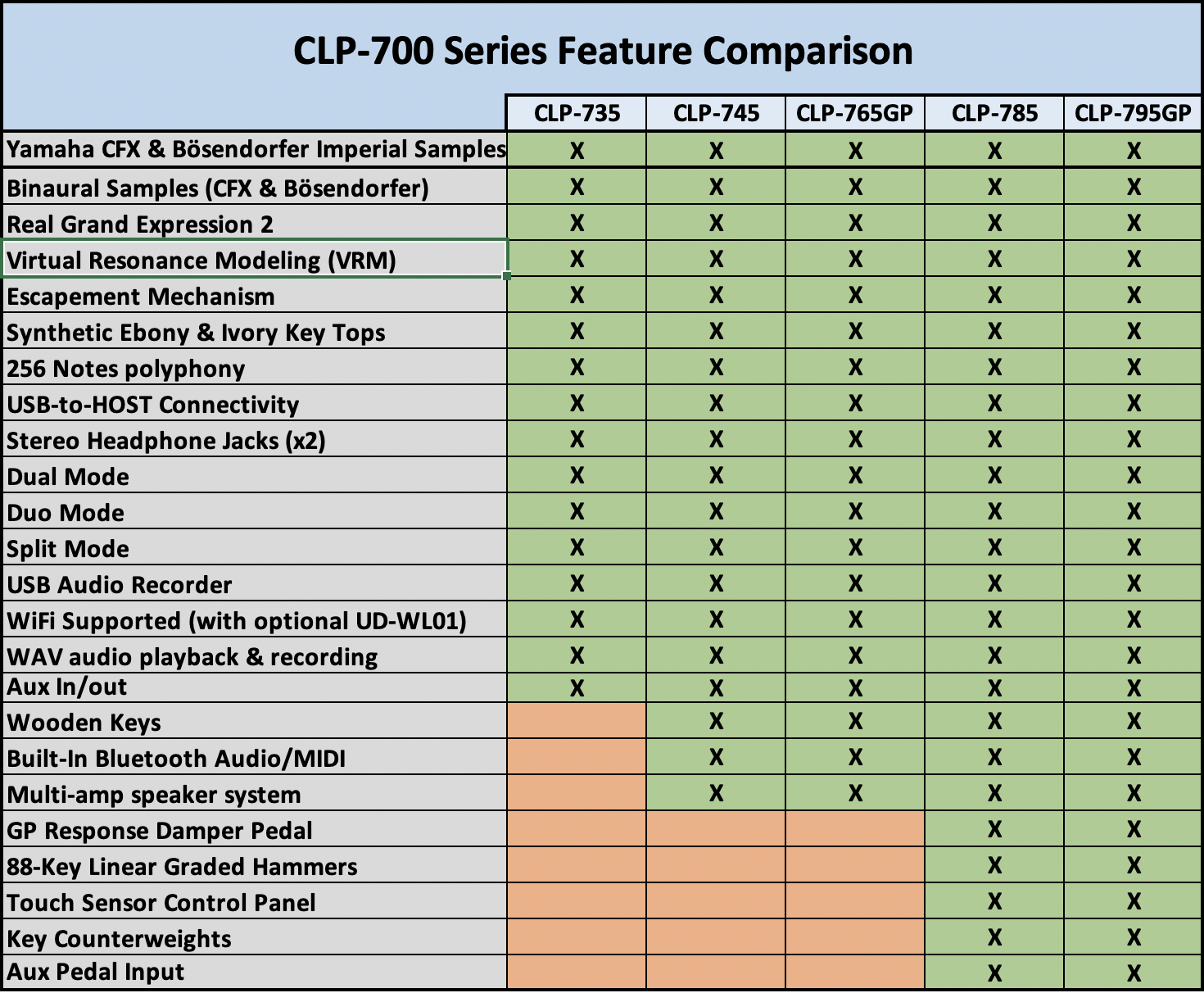